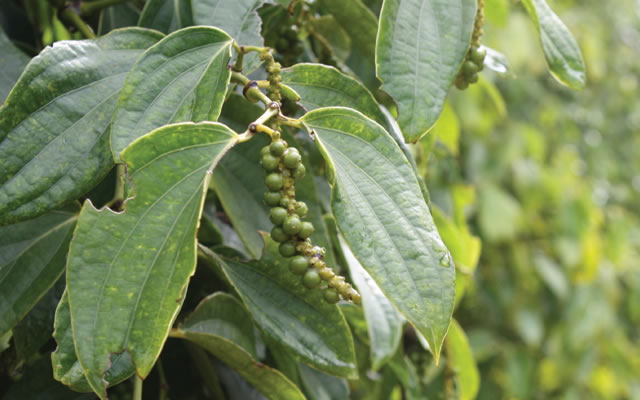 Pepper from the Kampot Province of southwestern Cambodia has long been considered among the best pepper in the world.

During the days of French Indochina, almost the entire production of Kampot pepper was sent to the best restaurants in France.

In the 1970s, the farmers were relocated and the farms withered under the brutal reign of Pol Pot’s Khmer Rouge.

Today Kampot pepper is being organically grown by about 135 families, using methods that go back centuries.

Certified Organic: Fertilization is applied all year long by way of new soil, bat guano, and/or cow dung. Some producers make fertilizers from rice-field crabs. The use of chemicals on Kampot pepper is forbidden.

Kampot pepper's geographical indication designates and protects the product. It assures a particular quality, reputation, production standard and makes sure it is only grown in the specified area.

Black: The spiciest of the three, this berry is harvested while green and dried under the sun.

Red: This unique variety is sweeter, fuller and more well-rounded, but with less heat than the black pepper. It is created when the peppercorns are allowed to fully ripen on the vine, turning red.

White: The mildest of the three, this variety is created by soaking fully ripe peppercorns in hot water allowing the red skin to fall away. It is used in dishes in which you do not wish to have black or red specks of pepper, such as white sauces.